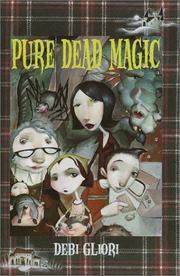 Mary Poppins meets the Addams Family in a nonstop farce that spins readers and characters through cyberspace, from a cluttered mansion in the Scottish highlands to an elegant Italian palazzo. Three weeks earlier, paterfamilias Luciano Strega-Borgia had stormed out of StregaSchloss in a snit and mysteriously vanished. Now, with witch graduate school about to open, his grieving wife Baci is desperately in need of a nanny unfazed by the crocodile in the moat, the dragon, yeti, and griffin in the cellar, and a trio of strong-minded children ages 1, 10, and 12. Enter motherly Flora McLachlan, a cool-headed retired witch with an unusually useful Palm Pilot. There’s one crisis solved—but the plot thickens: Luciano wakes up in Italy, kidnapped by evil half-brother Don Lucifer di S’Embowelli Borgia, and, shortly before the arrival at StregaSchloss of an ill-fated squad of hitmen (one in a bunny suit) hired by Don Lucifer, young Titus and Pandora Strega-Borgia inadvertently e-mail baby Damp through Luciano’s PC. This debut fiction from Gliori (Polar Bolero, p. 497, etc.) is also the first of a projected trilogy, though it stands sturdily on its own. She fills it with incident, as well as magical transformations, nauseating messes, cartoon violence, just deserts, and an array of exaggerated characters ranging from innocent to vile, quietly competent to totally clueless. Should Lemony Snicket grow a bit stale, here’s the perfect antidote. (Fiction. 11-13)