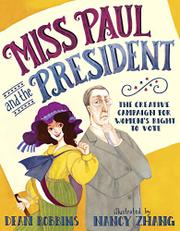 MISS PAUL AND THE PRESIDENT

The Creative Campaign for Women's Right to Vote

In time for the national elections, the story of an ardent early-20th-century fighter for women’s suffrage.

Alice Paul was deeply committed to women’s voting rights, a passion inflamed in her youth when she witnessed her father but not her mother going to the polls. Reading in the Constitution that elections were open only to men, she schooled herself about suffrage and eventually joined the burgeoning movement. She organized parades, letter-writing campaigns, and White House protests, though her efforts failed initially. One attention-getting accomplishment was to steal Woodrow Wilson’s thunder when the newly elected president arrived at a Washington, D.C., train station expecting cheering crowds. Instead, the throngs were attending—some jeering at—a nearby parade Paul had organized. Even a meeting this nervy woman initiated with the president aroused little sympathy. The arrest of Paul and other suffragists during a protest—and strong support from the president’s daughter—finally convinced Wilson to urge Congress to pass a law granting women the vote. The simple narrative ably explains and arouses respect for Paul’s ardor and achievements. The cheery, cartoony illustrations, created in watercolor, colored pencil, and other media, show a generally smiling, white Paul in her signature floppy purple hat. Endpapers feature illustrated newspaper headlines that set events in context. Readers may regret the absence of a glossary.

Useful for discussions about women’s rights and political influence.