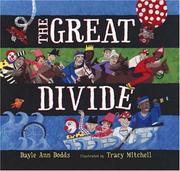 From Dodds (The Shape of Things, 1994, not reviewed, etc.), a rhyming, reckless text that makes a math process pleasurably solvable; Mitchell’s illustrative debut features a smashing cast of 1930s characters and a playfulness that will keep readers guessing. The premise is a Great Race: at the sound of the gun, 80 bicycle racers take off at top speed. The path diverges at the top of a cliff, and half the racers hurtle forever downward and right out of the race and the book. The remaining 40 racers determinedly continue in boats, their curls, spyglasses, eye patches, matronly upswept hairdos, and Clara Bow—lips intact. Whirlpools erupt to divide them again and wreck their ships, so it’s time to grab the next horse and ride on. The race continues, despite abrupt changes in modes of transportation and in the number of racers that dwindle by disastrous divisions, until a single winner glides over the finish line in a single-prop plane. The pace is so breathless and engaging that the book’s didactic origins all but disappear; few readers will notice that they’ve just finished a math problem, and most will want to go over all the action again. (Picture book. 5-10)