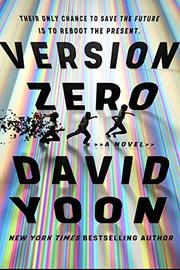 A trio of disgruntled coders, a reclusive genius, and a teenager attempt to take down the internet—the whole damned thing.

For his first adult novel, YA superstar Yoon draws on his decades in the tech industry to envision a takedown of the digital world so complete that paper comes back into fashion. The book’s main protagonist is Max Portillo, a Salvadoran American programmer for Wren, the world’s all-encompassing social media platform. Cal Peers, the company's CEO, invites Max to contribute to the Soul Project, an unabashedly evil plan to hoover up personal data that would guarantee higher market penetration. Max is horrified. Together with his best friend, Akiko Hosokawa, and her boyfriend, Shane Satow, Max envisions a global hack he dubs Version Zero, using anonymous personae to put a permanent dent in the web’s usability. “We broke it to fix it,” the anonymous hackers explain. Yoon never fully clarifies his version of the world, but there are breadcrumbs to follow—references to a Handmaid’s Tale–like social hierarchy that includes “whitemen” and “browns” and targets that include the world’s most influential companies, proxies for Facebook, Uber, Reddit, Amazon, and Apple. The mischief rises to another level when the three friends are approached by Pilot Markham, a wildly successful and equally withdrawn entrepreneur who believes the internet has left us emotionally bankrupt and who wants to help take their scheme to the next level with the help of his teenage neighbor, Brayden Turnipseed. Markham’s thirst for revenge was largely caused by his daughter’s untimely death by trolls, but he’s certainly as unhinged as his enemies. Digitally agile readers will recognize plenty of the ills of our time, and some will empathize with the counterintuitive way our heroes interpret the modern adage “Move fast and break things.”

A fast-paced, contemporary take on The Monkey Wrench Gang, blowing up digital infrastructure instead of dams.