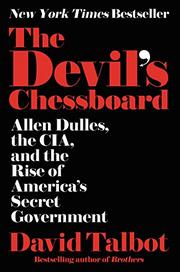 Allen Dulles, the CIA, and the Rise of America's Secret Government

Former Salon founding editor-in-chief Talbot (Season of the Witch: Enchantment, Terror and Deliverance in the City of Love, 2012, etc.) shares his extensive knowledge and intense investigations of American politics with a frightening biography of power, manipulation, and outright treason.

The story of Allen Dulles (1893-1969), his brother John Foster, and the power elite that ran Washington, D.C., following World War II is the stuff of spy fiction, but it reaches even further beyond to an underworld of unaccountable authority. Dulles’ career began in the New York law firm of Sullivan & Cromwell, where he built a powerful client list. During wartime in Switzerland, he worked to protect his clients’ corporations and build his own organization. In direct opposition to Franklin Roosevelt’s policy, he sought a separate peace with the Germans to use them to fight communism. Talbot delivers a variety of thrilling stories about Dulles that boggle the mind, from skimming funds from the Marshall Plan to using Richard Nixon as his mouthpiece in Congress. It is really about the power elite, the corporate executives, government leaders, and top military officials who controlled the world. They protected corporate interests in Iran, Guatemala, and elsewhere, and they fomented revolutions, experimented in mind control, and assassinated those who got in their way. With John Foster as secretary of state, this “fraternity of the successful” enforced a Pax Americana by terror and intimidation, always invoking national security and often blatantly disobeying policy guidelines. The author asserts that the Bay of Pigs was an intentional failure, meant to force John F. Kennedy to invade Cuba and retrieve corporate properties. Even out of office, Dulles’ conspiracies continued. Talbot also delves into CIA involvement in Kennedy’s assassination. Ultimately, the blatant manipulative activities of the Dulles brothers will shock most readers.

Washington, D.C., regulars may know some of this information, and foreign nations certainly do, but all engaged American citizens should read this book and have their eyes opened.