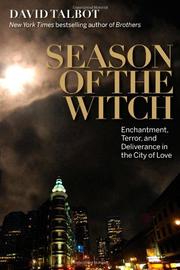 SEASON OF THE WITCH

Enchantment, Terror and Deliverance in the City of Love

An ambitious, labor-of-love illumination of a city’s soul, celebrating the uniqueness of San Francisco without minimizing the price paid for the city’s free-spiritedness.

“This is my love letter to San Francisco,” writes Salon founder and CEO Talbot (Brothers: The Hidden History of the Kennedy Years, 2007). “But if it’s a valentine, it’s a bloody valentine, filled with the raw truth as well as the glory about the city that has been my home for more than three decades now.” More than a retread of beatnik and hippie years or a series of chapters on colorful characters (has any city boasted more than San Francisco?), the author encompasses the city’s essence. He seeks to make sense of how San Francisco became a magnet for those who felt they didn’t fit elsewhere, how it sparked the “Summer of Love,” a race war, the murders of its mayor and his charismatic ally (in which the author finds the police department “deeply implicated”), radical bombings, a high-profile kidnapping and the most notorious mass suicide in human history (Jonestown, in exile from San Francisco, which the author says should more appropriately be considered a “slaughter”).  Talbot loves his city deeply and knows it well, making the pieces of the puzzle fit together, letting the reader understand how a charismatic religious crackpot such as Jim Jones could wield such powerful political influence, how the Super Bowl victory of the San Francisco 49ers helped the city heal, how the conservative Italian Catholics who had long lived there wrestled with exotic newcomers for the soul of the city. “Cities, like people, have souls,” he writes. “And they can be broken by terrible events, but they can also be healed.”

Though he’s a little too enamored with “angel-headed hipsters” and “fairy dust,” Talbot takes the reader much deeper than cliché, exploring a San Francisco that tourists never discover.