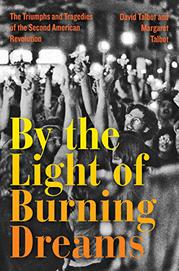 BY THE LIGHT OF BURNING DREAMS

The Triumphs and Tragedies of the Second American Revolution

Through sharp reporting and good storytelling, the authors enliven a journalistic genre that in less skilled hands might have gone flat: the “Where are they now?” story. They devote a chapter to each of seven flashpoints of the 1960s and ’70s that created “the second American Revolution.” These include Black Power, gay pride, the anti-war movement, the siege of Wounded Knee, the battle for abortion rights, the rise of the United Farm Workers, and the “celebrity activism” embodied by John Lennon and Yoko Ono. The authors show how and why each movement unfolded, focusing on key figures like Bobby Seale and Dolores Huerta and describing their subjects’ early activism as well as their later lives. They aim partly to enlighten students, such as those who, a professor lamented, know the Panthers “only by their cool regalia…the black leather coats, the berets, the dark glasses.” But an abundance of fresh material gives this book an intergenerational appeal. In their portrait of the feminist abortion clinic the Jane Collective, the authors note that before Roe v. Wade, one doctor who did abortions took startling safety precautions: “An assistant picked the women up on street corners, blindfolded them, and brought them to undisclosed locations.” The authors also vividly portray events such as Cesar Chavez’s trailblazing efforts to organize grape pickers, Craig Rodwell’s quest to open America’s first gay and lesbian bookstore, and the Ojibwe leader Dennis Banks’ bold escape from Wounded Knee as federal officials swept up Native resisters. Some readers may fault a few of the choices—particularly that of Lennon rather than Bob Dylan as the main representative of “protest songs”—but even the dissenters may appreciate that the authors avoid Allan Bloom–style crankiness in recalling the ’60s and evoke the ’70s without using the word disco.

An intelligent and sympathetic reappraisal of the political upheavals of the ’60s and ’70s.