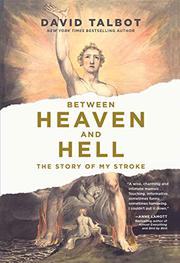 BETWEEN HEAVEN AND HELL

The Story of My Stroke

A near-death, new-life memoir by the San Francisco author and founder of Salon.

In short chapters that had their genesis on Facebook, Talbot (The Devil's Chessboard: Allen Dulles, the CIA, and the Rise of America's Secret Government, 2015, etc.) recounts a year of recovery, upheaval, and transformation following the stroke that almost killed him. He also reflects on the pace of the stress-filled career that brought him to this precipice, in his mid-60s, while he was still trying to navigate his way through considerable Hollywood challenges in attempting to bring his books to the screen. As the hard-charging CEO and editor-in-chief of Salon, he championed progressive investigative journalism at a time when the industry was heading toward a financial abyss. “I believed then that Salon was worth dying for. We were caught up in history’s hurricane,” he writes, with the somewhat messianic self-importance that occasionally typifies his tone. (Talbot also compares himself to the revered mystic monk Thomas Merton, though “not religious.”) Though the author is a Type A personality in overdrive, his lessons should strike a responsive chord in many readers. “My stroke did not just change my life,” he writes. “It saved my life.” By necessity, he slowed down, he lost a lot of weight, and he pared his existence down to the essentials and became focused on what really matters. He made his peace with death. He learned to “live each moment like it’s your last, because it just might be. Embrace your mortality. Even celebrate it. And let the shadow of death make the light in your life only seem brighter.” These are the sort of sentiments upon which countless self-help books are constructed, but Talbot demonstrates the conviction of someone who has been there and back and now knows what is really at stake.

A book Talbot likely wrote mainly for himself, but it should provide inspiration for others facing similar challenges.