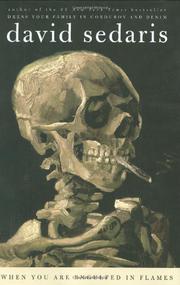 WHEN YOU ARE ENGULFED IN FLAMES

Older, wiser, smarter and meaner, Sedaris (Dress Your Family in Corduroy and Denim, 2004, etc.) defies the odds once again by delivering an intelligent take on the banalities of an absurd life.

The author’s faithful fans probably won’t be turned off by his copyright-page admission that these pieces, most seen before in the New Yorker, are only “realish.” They feel real, whether Sedaris is revealing his troubling obsession with a certain species of spider or describing a lift from a tow-truck driver who kept saying things like, “yes, indeedy, a little oral give-and-take would feel pretty good right about now”—the ring of truth adds to the book’s horrified-laughter factor. The author still draws from the well of familial tragicomedy in pieces that dissect his parents’ taste in modern art (“Adult Figures Charging Toward a Concrete Toadstool”) and their reactions to what he wrote about them in his first book (“fifty pages later, they were boarding up the door and looking for ways to disguise themselves”). Most of the essays, however, chronicle expatriate life in England, France and Japan with his long-suffering and improbably talented boyfriend Hugh. Sedaris positions himself as a hapless Bertie Wooster to Hugh’s Jeeves, lazily allowing his partner’s mother to clean their apartment (“I just sit in a rocker, raising my feet every now and then so she can pass the vacuum”) and marveling at Hugh’s interest in, well, doing things. A highpoint is “All the Beauty You Will Ever Need,” which starts as a rant about his boyfriend’s ludicrous self-sufficiency (“Hugh beats underpants against river rocks or decides that it might be fun to grind his own flour”) but twists into a sharp declaration of love that’s all the more touching for its lack of sentimentality.

Just when Sedaris seems to have disappeared down the rabbit hole of ironic introspection, he delivers a cracking blow of insight that leaves you reeling.