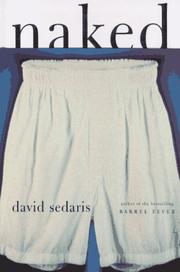 In this collection of essays, playwright and NPR commentator Sedaris tops his anarchically hilarious miscellany Barrel Fever (1994) by inventing a new genre: autobiography as fun-house mirror. From the first sentence (``I'm thinking of asking the servants to wax my change before placing it in the Chinese tank I keep on my dresser''), Naked pretty well clobbers the reader into dizzy submission. Growing up in Raleigh, N.C., Sedaris had disruptive nervous tics that only disappeared once he took up smoking, which, ``despite its health risks, is much more socially acceptable than crying out in tiny voices.'' The author volunteered at a mental hospital and spoke solely in Shakespearean English for a spell. One Christmas his sister brought home a coworker who moonlighted as a prostitute: ``From this moment on, the phrase `ho, ho, ho' would take on a whole different meaning.'' Sedaris's best humor is generally rooted in misery: At college he befriended ``a fun girl with a degenerative nerve disease'' and confined to a wheelchir, with whom he successfully shoplifted (no one stopped them) and hitchhiked (everyone stopped for them); he astutely illuminates the weird mixture of altruism and vanity that motivated him to become his friend's caretaker. Sedaris's extensive rÇsumÇ of hitchhiking trips and dire jobs has provided him with an absurd array of distressing incidental characters, like the belligerent, legless Jesus freak for whom he worked making jade clocks in the shape of Oregon. The author's wisecracking mother emerges as a full-blown comic heroine, and the essay discussing the months before her death achieves a brilliant synthesis of solemnity and humor. Only at the end, when describing a visit to a downscale nudist camp, does Sedaris disappoint, as he seems to have gone on the jaunt solely to acquire filler material. Sedaris applies the same deadpan fastidiousness to his life that Charlie Chaplin applied to his shoe in The Gold Rush—this is splendid stuff.*justify no*