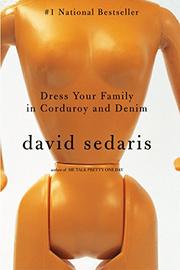 DRESS YOUR FAMILY IN CORDUROY AND DENIM

Known for his self-deprecating wit and the harmlessly eccentric antics of his family, Sedaris (Me Talk Pretty One Day, 2000, etc.) can also pinch until it hurts in this collection of autobiographical vignettes.

Once again we are treated to the author’s gift for deadpan humor, especially when poking fun at his family and neighbors. He draws some of the material from his youth, like the portrait of the folks across the street who didn’t own a TV (“What must it be like to be so ignorant and alone?” he wonders) and went trick-or-treating on November first. Or the story of the time his mother, after a fifth snow day in a row, chucked all the Sedaris kids out the door and locked it. To get back in, the older kids devised a plan wherein the youngest, affection-hungry Tiffany, would be hit by a car: “Her eagerness to please is absolute and naked. When we ask her to lie in the middle of the street, her only question was ‘Where?’ ” Some of the tales cover more recent incidents, such as his sister’s retrieval of a turkey from a garbage can; when Sedaris beards her about it, she responds, “Listen to you. If it didn’t come from Balducci’s, if it wasn’t raised on polenta and wild baby acorns, it has to be dangerous.” But family members’ square-peggedness is more than a little pathetic, and the fact that they are fodder for his stories doesn’t sit easy with Sedaris. He’ll quip, “Your life, your privacy, your occasional sorrow—it’s not like you're going to do anything with it,” as guilt pokes its nose around the corner of the page. Then he’ll hitch himself up and lacerate them once again, but not without affection even when the sting is strongest. Besides, his favorite target is himself: his obsessive-compulsiveness and his own membership in this company of oddfellows.

Sedaris’s sense of life’s absurdity is on full, fine display, as is his emotional body armor. Fortunately, he has plenty of both.