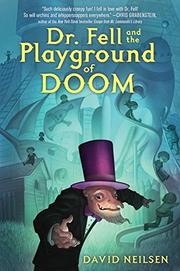 DR. FELL AND THE PLAYGROUND OF DOOM

by David Neilsen ; illustrated by Will Terry

The last house on Hardscrabble Street, empty and old, has always been a playground for the local children, so when a “sold” sign appears in the yard, no one’s pleased. Jerry and Gail Bloom and Gail’s friend Nancy Pinkblossom meet their new neighbor, the wizened Dr. Fell, and bemoan the loss of their play space. A few days later, a fantastical playground of pirate ships and castle towers appears in Dr. Fell’s yard. Before long, children start getting hurt there, but every injury on Dr. Fell’s playground heals quickly under his care. Gail, Jerry, and Nancy grow suspicious, especially when their parents start acting strangely. Then Gail returns from a visit to Dr. Fell acting brainwashed. Her friend and brother cure her, but as Dr. Fell’s control of the town grows, the trio realizes something terribly sinister’s afoot. Can they head it off? Actor and storyteller Neilsen’s debut tries too hard from the start. Dr. Fell speaks in purple prose and then translates himself nearly every time he converses, a characterization tic that grows old quickly. Repetition of humorless gags and forced quirkiness in nomenclature cannot be saved by a shallow attempt at Lovecraft-ian horror far too late in the tale. Terry’s black-and-white illustrations add atmosphere and depict an evidently all-white cast.