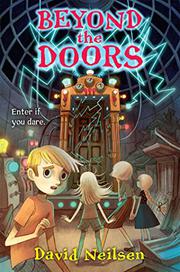 Four motherless siblings embark on an adventure that leads them through the memories—and nightmares—of the past.

The Rothbaum siblings—Janice, Zack, Sydney, and Alexa, all white—are having one of the worst days of their young lives. Their father has been badly burned in a fire and is in a coma, leaving the foursome to be raised by their peculiar aunt. Living with Aunt Gladys means following her unusual rules, the most important of which is to not touch the doors. This rule itself seems odd, as the rooms of Gladys’ house have archways, not doors. Equally strange is that although the rooms have no doors to close, several are filled with unattached doors in arbitrary piles. The children soon learn of the connection between doors and the memories of the people who use them, setting them on the path to unlock the mysteries of their father’s accident and their mother’s disappearance. Neilsen’s premise is better than its execution. The Rothbaum siblings’ character development is superficial, and their voices frequently run together with little distinction for individual personality. Neilsen haphazardly interjects broad humor through the story, primarily through unusually named one-dimensional adult characters. A subplot concerning the foster system is misleading and outdated, causing the humor to fall flat.

Unsuccessful; readers may be more pleased with Charles Gilman’s Lovecraft Middle School series for sci-fi fun or The Mysterious Benedict Society or A Series of Unfortunate Events for mystery and humor.