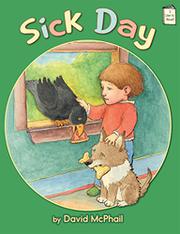 Dog lies on Boy’s feet to help him get warm, then shares his bone with him. (Boy eats his mom’s chicken soup instead.) Bird comes calling, but Dog tells him Boy is sick, and he flies off, returning with a slice of pizza to help him get well. (Boy doesn’t eat that either.) Feeling better the next day, Boy and Dog head to the tree house and find Bird sick (too much pizza). At this point, the minimalist story devolves even further, losing the slight humor of the first part. “Boy and Dog sit with Bird. // Then Bird is fine. / But Dog is sick.…Boy and Bird sit with Dog. // Then they nap. / Dog jumps up. ‘I am fine,’ he says.” Upon which, the three happily play together with a ball. Unlike its precursor, Boy, Bird, and Dog (2011), this one feels (and reads) like a Dick and Jane primer, stilted language, thin plot and all. McPhail’s ink-and-watercolor artwork depicts the three friends in the softly colored, rounded vignettes on each page that, along with the 64 simple words and short sentences, help those new to reading decode the words.

Just doesn’t compare to Shelley Moore Thomas and Jennifer Plecas’ similarly themed Get Well, Good Knight (2002) or even to the trio’s prior adventure.