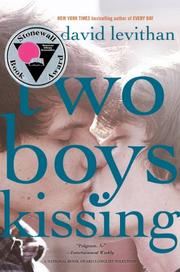 Gay past and gay present collide.

Right from the start readers will know something weird is going on with Levithan’s latest. The narrator(s) refers to themselves as “us,” and readers will soon deduce that it’s the Kushner-esque collective voice of a gay generation from decades before, one that was ravaged by AIDS, anger, politics and more. It’s through their lens that this story of seven boys from the present is told. The first two—whose activities are imparted in the work’s title—are Craig and Harry. They’re out to break the world’s kissing record (32 hours, 12 minutes and 9 seconds) to protest a hate crime enacted upon their friend. They’re not a couple anymore, and Craig still smarts from the breakup. A second pair—Peter and Neil—have been a couple for a while, but that doesn’t mean their relationship is perfect. Pink-haired trans Avery and blue-haired Ryan meet at an alternative LGBT prom, and sparks fly. All the while, Cooper, kicked out of his parents’ house and obsessed with gay-hookup apps, suffers alone. The story drifts back and forth and among these seven youth under the watchful, occasionally curmudgeonly voice of the past, which weighs down the narrative too much at times. The novel has genuine moments of insight and wisdom, but it feels calculated and lacks the spontaneity that made Levithan’s first two novels so magical. Still, fans of his earlier works will appreciate the familiar tone, characters and themes they’ve come to love over the years.

It’s well-intentioned and inspiring, but it doesn't push any boundaries.