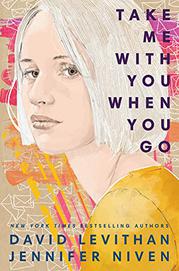 TAKE ME WITH YOU WHEN YOU GO

When his big sister, Bea, disappears just two months before her Indiana high school graduation, leaving him without an ally at home against their passive aggressive mom and viciously abusive stepfather, 15-year-old Ezra oscillates between rage and terror—even after Bea emails that she’s (more or less) OK. Fortunately, Ezra can look to his boyfriend, Terrence, and other outside allies for support when the punishments and public scenes get to be too much. Bea has walled off everyone except her beloved little brother and has, it turns out, quixotically set out on a quest of her own…only to discover that their mother hasn’t been exactly straight about important elements of their family history. The authors frame this heartbreaking outing through emails of frequently monumental length and a relentless focus on either pep talks or event and relationship analysis. Perceptive readers who make it through the emotional wringer will encounter certain themes: that people and the reasons for what they do are rarely if ever simple; that adolescence can be scary but exhilarating (the solid, healthy bond between Ezra and Terrence being a case in point); and that seeing oneself clearly is a first step toward real change. Ultimately, Ezra and Bea come to understand that it’s better to be running toward the future than from the past. Ezra is White; Terrence is Black.

A wrenching, if logorrheic, epistolary portrait of a dysfunctional family.