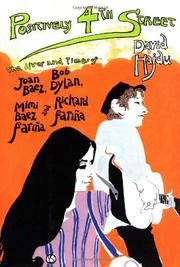 Overweening ambition drives this insightful story of the 1950s folk music revival that anticipates the arrival of the 1960s counterculture.

By the end of the 1950s, American folk music (by such performers as Pete Seeger and Woody Guthrie) had established a small but loyal following. Entertainment Weekly editor Hajdu (Lush Life, 1996) believes that young people became interested in folk because of “its antihero mythos—a sense of the music as the property of outcasts.” College students who frequented the coffeehouses where folk began to flourish “were seeking something anti-intellectual” and would-be performers (including the Baez sisters, Richard Fariña, and Bob Dylan) flocked to the music because of its simple (and anti-commercial) approach. The charismatic Fariña was a promising writer who married folk singer Carolyn Hester and tried to hitch his wagon to her star (with little success), whereas Joan Baez (the “virgin princess”) haunted the Greenwich Village coffeehouses on 4th Street, shamelessly stole other singers’ material, and went on to fame. Mimi Baez coveted—and never came anywhere near—her sister Joan’s success. And Dylan (who came to New York in search of direction and found his model in Woody Guthrie) got his big break from Joan, who fell in love with him. Although the naked ambition of each these characters presents an unedifying spectacle throughout, Hadju saves his censure for Dylan, writing that the “irony of Robert Zimmerman’s metamorphosis into Bob Dylan lies in the application of so much elusion and artifice in the name of truth and authenticity.” Even so, Dylan appears more deluded than mendacious—a man who hid his identity because he was more confused than his audience about who he was.

A strong and vivid portrait of some remarkable characters—and one that manages against the odds to get to the people behind the egos.