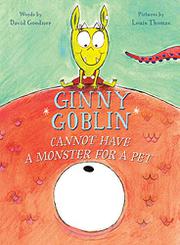 GINNY GOBLIN CANNOT HAVE A MONSTER FOR A PET

The lovable, green-skinned imp has returned following her introduction in Ginny Goblin Is Not Allowed to Open This Box (2018).

The first page establishes the fact that Ginny Goblin loves animals and that goats are among her favorites. The grinning, big-eyed toddler stands atop a similarly featured goat. The page turn reveals why goats are not good house pets: Five comical goats are wreaking havoc in a dining room. The fun begins when the narrator naively says, “Maybe if we help Ginny Goblin find a pet, she’ll stop trying to herd goats through the house.” The art perfectly complements the imaginative, absurd text, as Ginny—defying authority—tries to acquire a pet through such means as a bear trap, military tank, submarine, and rocket ship. No hermit crab or bunny for her! Just enough shiver accompanies the text and comical art’s introductions to such creatures as a kraken, a dragon, a basilisk, and a space monster. Even as Ginny is depicted doing the things she is not allowed to do, the text poses the frightful consequences: “If Ginny took her basilisk to school for show-and-tell, her whole class would turn into statues.” The text further accommodates little ones by frequently invoking the title; its tongue-in-cheek humor and clever wordplay will keep more sophisticated readers engaged. The surprise ending will elicit both a smile and a wink from all.

Ginny is becoming a symbol of toddler power.