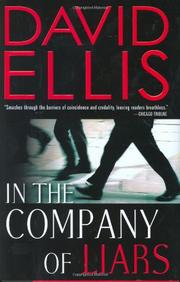 IN THE COMPANY OF LIARS

The author of Jury of One (2004), etc., returns with another thriller in which past really is prologue.

Perhaps taking his cue from the film Memento, which tells its story in reverse chronology, Ellis launches his latest with the climaxes of a case that began 11 years earlier. Then, in a series of flashbacks, he works through the clues behind the clues that led to these two events. In the first, the body of best-selling novelist Allison Pagone is found in a blood-splattered bathroom, an apparent suicide. In the second, American forces in the Sudan nab elusive terrorist leader Mushan al-Bakhari in “a moment for which all Americans have waited for years” (meaning Mushan is you know who). How are the events connected? Ellis takes a while to tie these threads together. Initially, he focuses, as in prior novels, on political corruption. Pagone, it seems, killed herself after murdering a lover who was about to finger her ex-husband for bribing U.S. senators to influence their votes on legislation favoring a drug company. One of her earrings turns up at the crime scene, as does a strand of hair bearing her DNA. She also had hacked into the victim’s computer to make it seem he sent her an e-mail that, in turn, she can use as an alibi. Ellis practically drums these and other clues into the reader, perhaps having trouble getting up to speed in reverse. Eventually, he eases up as the terrorism angle becomes integral. It’s revealed that a doctor plans to spike the drug company’s baby aspirin with an undetectable, fatal poison. Plans to foil that plot explain all that precedes and may send some readers back to page one to see how nothing was what it seemed.

Annoyingly repetitious, especially at midpoint, but amply rewarding at the end—which, of course, is the beginning.