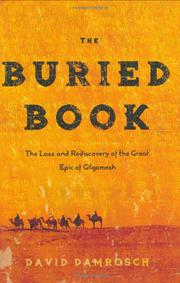 The Loss and Rediscovery of the Great Epic of Gilgamesh

How the epic poem Gilgamesh was composed, modified, recorded on clay in cuneiform, stored, smashed, lost and found.

For this general history and literary detective story, Damrosch (English and Comparative Literature/Columbia Univ.) steps a little outside the groves of academe, in whose shade he’s written and/or edited various scholarly anthologies. He begins with the Eureka! moment in 1872: George Smith, an assistant curator at the British Museum, came across Gilgamesh among the thousands of cuneiform fragments slowly being translated from tablets shipped from the Middle East several decades earlier. When Smith realized the significance of what he had found, Damrosch tells us, he removed some clothing and danced with joy. Subsequent chapters employ a Raiders of the Lost Ark approach to chart the lives and careers of the scholar-adventurers who first explored Assyrian culture by excavating sites in Iraq now associated in the public mind with internecine violence. Among them were Austen Henry Layard and Hormuzd Rassam, who, on a mid-19th-century expedition for the British Museum, uncovered the long-buried ruins of Nineveh (across the Tigris from Mosul) and the royal library containing Gilgamesh. Damrosch offers a long (perhaps overlong) re-telling of Rassam’s difficulties with the mad Abyssian King Theodore, a sanguinary tale told with even greater panache by George MacDonald Fraser in his novel Flashman on the March (2005). Things pick up with the author’s engaging retelling of the story of Gilgamesh, enfolded within the history of Assyrian King Ashurbanipal’s assembly of the world’s greatest library and the destruction of Nineveh after a three-month siege by Babylonian invaders. Fragments of Gilgamesh and thousands of other tablets then lay covered and waiting for centuries, until the arrival of the men Damrosch profiled in the early chapters. In his final pages, the author looks at how Gilgamesh has affected later writers, including Philip Roth, whose The Great American Novel (1973) features a baseball great named Gil Gamesh.

A graceful example of how rigorous scholarship and erudition can inform and animate popular history.