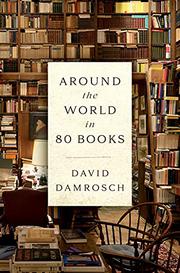 AROUND THE WORLD IN 80 BOOKS

A modern-day Phileas Fogg circumnavigates the globe in books.

Damrosch, chair of the department of comparative literature at Harvard and founder of its Institute for World Literature, mimics Jules Verne’s ambitious itinerary of world travel from east to west as he delves into 16 geographical groups of five books “that have responded to times of crises and deep memories of trauma,” navigating “our world’s turbulent water with the aid of literature’s map of imaginary times and places.” As he moves along, delving into plots, characters, and themes, and both prose and poetry, over centuries, he creates a vast, fascinating latticework of books within books. He begins in London, with “one of the most local of novels” and “one of the most worldly books ever written,” Virginia Woolf’s Mrs. Dalloway, which depicts a city that “bears more than a passing reference to Conrad’s heart of darkness.” Paris and Krakow are followed by “Venice–Florence,” with the old (Marco Polo, Dante, and Boccaccio) and the modern, Italo Calvino’s “magical, unclassifiable” Invisible Cities. Just like Damrosch’s own book, Calvino’s work views “the modern world through multiple lenses of worlds elsewhere.” Orhan Pamuk’s My Name Is Red is “a vibrant hybrid that re-creates a vanished Ottoman past for present purposes,” while Jokha Alharthi’s Celestial Bodies “portrays life in a fully globalized Oman.” Traveling along at a brisk pace, Damrosch takes us to the Congo, Israel/Palestine, Calcutta and “Shanghai–Beijing,” before arriving in Tokyo, where he examines Japan’s “greatest, and strangest” writer, Yukio Mishima, and the “incommensurabilityof ancient and modern eras, Asian and European traditions, that fuels” his work. Brazil is home to one of the “most worldly of local writers,” Clarice Lispector, whose “remarkable short story collection,” Family Ties, the author admires. In Robert McCloskey’s One Morning in Maine, Damrosch fondly revisits a book he enjoyed as a child. Other writers serving as stops on his international tour include Joyce, Atwood, Voltaire, Rushdie, and Soyinka.