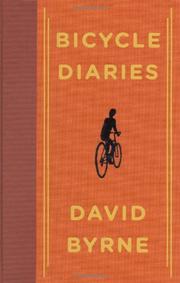 Renowned pop artist shares snippets from his travels and thoughts.

In recent years, Byrne (Arboretum, 2006, etc.) best known as the founder of the Talking Heads, has branched out into modern art, video and sound installation and writing, among other pursuits. Here he offers a compendium of brief travelogues colored by the unique perspective of an urban cyclist. From Manila and Sydney to Berlin and San Francisco, Byrne played shows, met with galleries and musicians and ate and drank in fine and humble restaurants, all the while finding ways to get from A to B using his folding bicycle. Not surprisingly, his preferred means of transportation worked beautifully in some cities and proved challenging in others, though he relished the edgy charms of even the grittiest routes. Byrne fans will enjoy this peek into the star’s daily life, which seemed calm, ruminant and pleasantly simple, yet shot through with the privileges that his fame and reputation afford—specifically, the opportunity to travel regularly and well. The narrative drifts from subject to subject—architecture, urban planning, modern art, music, politics, food, philosophy—never lingering on any one for more than a paragraph or two. One of the few recurring themes is Byrne’s notion that cities can be viewed as three-dimensional projections of people’s hopes, dreams and fears, and that this tangible collective spirit shapes the lives of residents in a self-perpetuating interplay. Whether describing what he made for lunch during a blackout or puzzling over the thorniest problems of civilization, the author is undeniably an intelligent, sensitive citizen of the world. It’s evident that he has thought deeply about many of the topics he presents, but his well-intentioned reflections on complex issues could benefit from a gifted editor and a more sustained analysis. As the book progresses, Byrne emphasizes the diary aspect more than the bicycle, which appears occasionally in the midst of his desultory ramblings before reemerging as the main subject of the final chapter.