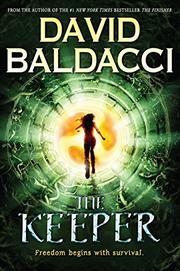 From the Vega Jane series, volume 2

Baldacci piles on the monsters as he sends Vega Jane and her hunky, clever sidekick Delph through the magical Quag in this follow-up to The Finisher (2014).

Escaping the walled town of Wormwood in hopes of finding the “truth” that lies beyond, the two teens befriend or, more often, flee or slaughter a laundry list of creatures: garms, amarocs, lycans, venomous jabbits, snake-haired alectos, green-blooded Soul Takers, dreads, grubbs, hyperbores, and numerous other residents of the broad, weirdly mutable wilderness. For variety, they are also twice captured—once by a mad subterranean king and then by the Quag’s 800-year-old Keeper—and Vega has to die to get across a certain river guarded by a skeletal boatman. These all turn out to be only temporary setbacks, however. In blatant bids to add appeal, Baldacci supplements the teeming cast of ravening boojums with a new companion who may be an ally, a rival for Delph, or both, plus familiar elements like a ring that makes its wearer invisible and Harry Potter–esque spells, a talking book that delivers only infuriatingly vague advice, and frequent Briticisms (“Wotcha, Vega Jane”). The flights and fights are all set pieces without much sense of suspense or danger, and there are so many of them that even bloodthirsty readers might echo Vega Jane’s own exhausted “Let’s just finish this.”

Not a stand-alone episode, but definitely a pleaser for creature-feature fans.