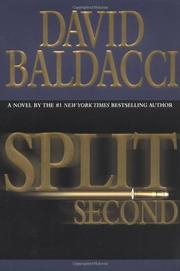 Two defrocked Secret Service Agents investigate the assassination of one presidential candidate and the kidnapping of another.

Baldacci (The Christmas Train, 2002, etc.) sets out with two plot strands. The first begins when something distracts Secret Service Agent Sean King and during that “split second,” presidential candidate Clyde Ritter is shot dead. King takes out the killer, but that’s not enough to save his reputation with the Secret Service. He retires and goes on to do often tedious but nonetheless always lucrative work (much like a legal thriller such as this) at a law practice. Plot two begins eight years later when another Secret Service Agent, Michelle Maxwell, lets presidential candidate John Bruno out of her sight for a few minutes at a wake for one of his close associates. He goes missing. Now Maxwell, too, gets in dutch with the SS. Though separated by time, the cases are similar and leave several questions unanswered. What distracted King at the rally? Bruno had claimed his friend’s widow called him to the funeral home. The widow (one of the few characters here to have any life) says she never called Bruno. Who set him up? Who did a chambermaid at Ritter’s hotel blackmail? And who is the man in the Buick shadowing King’s and Maxwell’s every move? King is a handsome, rich divorce, Maxwell an attractive marathon runner. Will they join forces and find each other kind of, well, appealing? But of course. The two former agents traverse the countryside, spinning endless hypotheses before the onset, at last, of a jerrybuilt conclusion that begs credibility and offers few surprises.