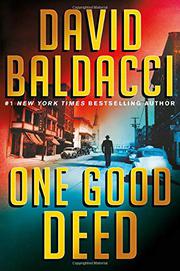 In 1949, Archer is paroled from Carderock Prison (he was innocent) and must report regularly to his parole officer, Ernestine Crabtree (she’s “damn fine-looking”). Parole terms forbid his visiting bars or loose women, which could become a problem. Trouble starts when businessman Hank Pittleman offers Archer $100 to recover a ’47 Cadillac that’s collateral for a debt owed by Lucas Tuttle, who readily agrees he owes the money. But Tuttle wants his daughter Jackie back—she’s Pittleman’s girlfriend, and she won’t return to Daddy. Archer finds the car, but it’s been torched. With no collateral to collect, he may have to return his hundred bucks. Meanwhile, Crabtree gets Archer the only job available, butchering hogs at the slaughterhouse. He’d killed plenty of men in combat, and now he needs peace. The Pittleman job doesn’t provide that peace, but at least it doesn’t involve bashing hogs’ brains in. People wind up dead and Archer becomes a suspect. So he noses around and shows that he might have the chops to be a good private investigator, a shamus. This is an era when gals have gams, guys say dang and keep extra Lucky Strikes in their hatbands, and a Lady Liberty half-dollar buys a good meal. The dialogue has a '40s noir feel: “And don’t trust nobody.…I don’t care how damn pretty they are.” There’s adult entertainment at the Cat’s Meow, cheap grub at the Checkered Past, and just enough clichés to prove that no one’s highfalutin. Readers will like Archer. He’s a talented man who enjoys detective stories, won’t keep ill-gotten gains, and respects women. All signs suggest a sequel where he hangs out a shamus shingle.

Archer will be a great series character for fans of crime fiction. Let’s hope the cigarettes don’t kill him.