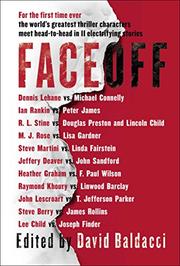 Editor Baldacci stages 11 collaborations between leading mystery writers. Some of the character pairings are logical: It's easy enough for Rebus to travel from Edinburgh to London to collaborate with Peter James' Roy Grace on an odd cold case—an ailing survivor of the 1960s gang wars between the Mods and Rockers wants to be tried for a murder he says he committed back then. But a humorous meeting between the eternally wandering Reacher and Joseph Finder's Boston investigator Nick Heller is sheer happenstance. They end up in a Beantown bar seated on opposite sides of a nervous Joe whose life has been threatened by Albanian mobsters. Being that many of these authors have rather similar styles, blending them is less of a challenge than one might think. Ultimately, the appeal of the stories depends on the liveliness of the writing. Among the winners is a pairing of Jeffery Deaver's forensic specialist Lincoln Rhyme (and partner Amelia Sachs) and John Sandford's profiler Lucas Davenport (and Lily Rothenburg) on a case involving a sadistic sex criminal. Another standout brings together lesser-known figures: Raymond Khoury's FBI man Sean Reilly and Linwood Barclay's building contractor Glen Garber (used only once before). The other duos are R.L. Stine (bringing a fictional wild card to the party with Slappy the Ventriloquist Dummy) and Douglas Preston & Lincoln Child; M.J. Rose and Lisa Gardner; Steve Martini and Linda Fairstein; Heather Graham and F. Paul Wilson; John Lescroart and T. Jefferson Parker; and Steve Berry and James Rollins.

Promoting "face-offs" pitting one author against another makes no sense since the goal here is cohesion. That said, this anthology handles its concept well.