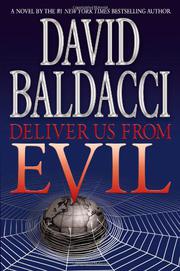 DELIVER US FROM EVIL

Evan Waller, aka Fadir Kuchin, aka “the Butcher of Kiev,” aka “the Ukrainian psychopath,” is one of those deep-dyed villains a certain kind of fiction can’t do without. Serving with distinction as part of the Soviet Union’s KGB, he joyfully and indiscriminately killed thousands. Now, many years later, posing as a successful businessman, he’s vacationing in Provence where, unbeknownst to him, two separate clandestine operations are being mounted by people who do not regard him with favor. Reggie Campion—28 and gorgeous—spearheads the first, an ad hoc group of monster-hunting vigilantes. Studly, tall Shaw (no first name supplied) is point guard for a rival team, shadowy enough to leave the matter of its origin ambiguous. While their respective teams reconnoiter and jockey for position, studly boy meets gorgeous girl. Monster-hunters are famous for having trust issues, but clearly these are drawn to each other in the time-honored Hollywood fashion. Shaw saves Reggie’s life. She returns the favor. The attraction deepens and heats up to the point where team-members on both sides grow unsettled by the loss of focus, singularly inopportune since, as monsters go, Waller rises to the second coming of Caligula—ample testimony furnished by a six-page, unsparingly detailed torture scene. In the end, the stalkers strike, bullets fly, screams curdle the blood, love has its innings and a monster does what a monster’s got to do.

The characters are paper thin, the plot twists mostly telegraphed, but the betting here is that the Baldacci army will once again show the stuff it’s made of.