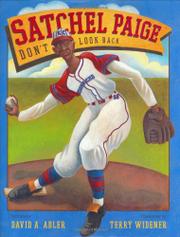 by David A. Adler & illustrated by Terry Widener

Satchel Paige was an amazing, immensely popular pitcher who won many games in the Negro Leagues. He was admired and respected by the white baseball stars like Joe DiMaggio, Ted Williams and Dizzy Dean, who faced him in off-season barnstorming games, but was virtually unknown by white baseball fans. He persevered through all the hardships and finally reached the major leagues at the age of 42, the year after Jackie Robinson broke the color barrier. Adler captures the real man behind the persona that Paige so carefully projected. He had whimsical names for his pitches, like “trouble ball” and whipsey-dipsey-do.” “Don’t look back, something might be gaining on you” is just one of the rules he invented for himself. But he was also outspoken about segregation and the limited opportunities of African Americans. He knew that racism had cheated him of a major-league career. Paige’s innate dignity shines in Widener’s cartoon-like, acrylic illustrations that beautifully complement the text. Another winning effort from Adler. (chronology, sources) (Picture book/biography. 7-11)