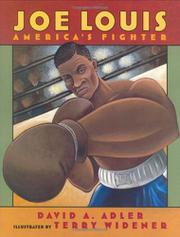 by David A. Adler & illustrated by Terry Widener

Adler and Widener offer a straightforward, beautifully illustrated biography of the legendary boxer. The grandson of slaves, Joe Louis Barrow moved from his native Alabama to Detroit with his large family at the age of 12. A visit to Brewster’s Gym kindles his dream of becoming a professional fighter. (He loses the “Barrow” because his name’s too long for an entry form.) After being knocked down seven times in his first amateur fight, Louis trains even harder, scoring a first-round knockout in his professional debut and earning the nickname “Brown Bomber.” The story covers his rise to the top during the Great Depression, including his victory over a white boxer; his dramatic bouts with German champion Max Schmeling; and his decision to join the Army. Another perfect marriage of words and pictures from an award-winning team, simple direct prose presents the facts while powerful paintings evoke both the greatness of the man and the glory of his achievements. Backmatter includes additional interesting facts about Louis’s life and the author’s sources. (Picture book/nonfiction. 6-9)