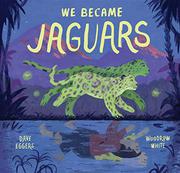 Left alone together, a small child and their grandmother transform into jaguars, walking on all fours on the carpet and then out into the night.

The grandmother, with her “very, very long” white hair, dark brows, crimson nails, and spotted cardigan, appears game for anything wild. The child has met her only once, and her bold demeanor will intrigue children used to benign literary grandmothers who dole out cookies and cuddles. This grandmother directs the child to look “leaner” and “fiercer” as they make the shape of a jaguar on the floor alongside her. “Now we go,” she states flatly. A clever gatefold shows the pair’s metamorphosis from white-skinned humans to furry felines stalking through night grasses. Transfixing painterly illustrations offer nocturnal purples and blues along with bioluminescent pinks and greens, creating a woozy, otherworldly habitat. The little jaguar seems a bit scared at first, tremulous, turning down raw rabbit by claiming an allergy. Young people will find humor in the child’s narration, perhaps especially when they relate that “we were somewhere in the Himalayas when I remembered that I had school.” The phrase “we jaguared on” repeats again and again as they cross varying landscapes, and it perfectly captures the fluidity of jaguar movement in its languid articulation. Children will relish this book’s blurred ambiguities; what’s real and what’s imagined are as hard to distinguish as a jaguar in the shadows.

A fresh inversion of expectations told in vivid art and idiom. (Picture book. 4-8)