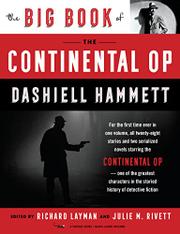 THE BIG BOOK OF THE CONTINENTAL OP

At long last, Black Lizard collects all 28 of the Op’s completed stories, plus the opening chapter of one incomplete tale and the original Black Mask serializations of the novels that were revised and published as Red Harvest and The Dain Curse.

Though he’s become synonymous with the hard-boiled shamus, the nameless operative for San Francisco’s Continental Detective Agency is not so much an anti–golden age detective—he made his first appearance in 1923, the same year as his polar opposite, Lord Peter Wimsey, before the gentleman sleuth had frozen into a bundle of clichés—as an anti–pulp detective, rarely carrying a gun in his earliest adventures and self-effacing about his talents and his testosterone. He’s also something of an anti-character who lacks not only a name, but many other individual markers that made his offspring Sam Spade such an indelible hero. But what a voice! As early as “It” (1923), the Op already sounds brisk, businesslike, precise, and articulate. In the eight (mostly early) stories not already available in the Library of America’s collection of Hammett’s crime stories, the Op, hiding some serious deductive chops beneath his mastery of violent action, figures out, among other things, why three corpses would have been sandwiched into a clothes press, which interested party took a shot at a bedridden patriarch, and what a known gangster has to do with the kidnapping of an advertising executive’s wife. Most of these tales, like the 20 more familiar ones from “The House in Turk Street” to “The Gutting of Couffignal” to “The Big Knockover,” begin with apparently simple cases that rapidly launch the Op into deeper waters that never quite close over his head. Editors Layman and Rivett make a persuasive case for Hammett’s willingness to adapt his style to three very different Black Mask editors, George W. Sutton, Philip C. Cody, and Joseph Thompson Shaw, the last of whom set the seal on Hammett’s transformation from pulp storyteller to one of America’s most influential novelists.

Of course the stories are uneven, often overlong and over-explained, and occasionally, like the all-too-aptly titled “This King Business,” just plain silly. No matter. Fans of hard-boiled fiction will know the holy grail when they see it.