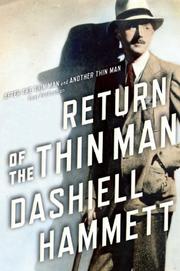 RETURN OF THE THIN MAN

Yet another trip to the Hammett archive discloses the two screen stories on which the films After the Thin Man (1936) and Another Thin Man (1939) were based, along with a bonus, an unproduced (and probably unproducible) outline for a Sequel to The Thin Man.

The biggest surprise here is how closely the husband-and-wife team of Frances Goodrich and Albert Hackett hewed to Hammett’s novella-length stories in preparing the two films’ screenplays. Fans of the films will find virtually all the suspects and plot twists already present in Hammett, together with much of the banter between retired detective Nick Charles and his socialite wife, Nora, all wrapped up in the lightly comic tone established by The Thin Man (1934). Who would have thought that Hammett himself wrote Nick’s burlesque response to the invitation from Nora’s aunt’s butler to “walk this way,” or that Goodrich and Hackett were mainly responsible for streamlining and simplifying Hammett’s twisty storylines and providing more business for Nora, whom Hammett tends to slight in favor of her more active husband? After the Thin Man—which takes the couple back to San Francisco to meet the corpse of Nora’s former gardener, and eventually that of her cousin Selma’s missing husband—is the more amusing, more inventive, and more satisfyingly mystifying of the two. Another Thin Man—which, borrowing much of its material from Hammett’s story “The Farewell Murder,” presents the couple with an infant son before they’re summoned to the Long Island estate of imperious Colonel Burr MacFay, the ex-partner of Nora’s late father, whose choleric conviction that he’s going to be murdered is eventually proved correct—offers more for Nora to do, though in an altogether more domestic role.

Judicious editors Richard Layman and Julie M. Rivett provide a notable addendum to the Hammett canon, even if both tales and their brief addendum read like screen treatments and the volume’s title perpetuates the canard that the thin man is Nick Charles.