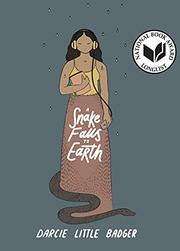 A SNAKE FALLS TO EARTH

A 16-year-old Lipan Apache girl from Texas and a cottonmouth person from the spirit world connect when both need help.

When Nina was 9, her Great-Great-Grandmother Rosita told her a story in Spanish and Lipan Apache. Using dictionaries to painstakingly make sense of the garbled transcription app results, Nina uncovers a mysterious story about Rosita’s sighting of a fish girl in her well, long after the joined era when animal people still lived on Earth. Nina uploads her musings about her family’s stories to the St0ryte11er video platform. In the Reflecting World, innocent Oli, a cottonmouth snake person, reluctantly leaves home, settling down and befriending ancient toad Ami, two coyote sisters, and a hawk. Animal people can shift between their true and false (humanoid) forms and are able to visit Earth; Nina’s and Oli’s lives intertwine when he and his friends travel to Texas seeking help after learning that Ami is dying because the earthly population of his toad species faces extinction due to human environmental destruction. They in turn help Nina with the suspicious man lurking near her Grandma’s home, an impending tornado, and her Grandma’s unexplained illness whenever she leaves her land. Little Badger (Lipan Apache) alternates between two distinct, well-realized voices—Nina’s third-person and Oli’s first-person perspectives—highlighting critical issues of language revitalization and climate change. The story leads readers through two richly constructed worlds using a style that evokes the timeless feeling of listening to traditional oral storytelling.

A coming-of-age story that beautifully combines tradition and technology for modern audiences.