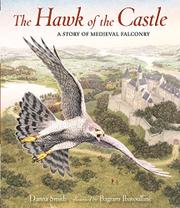 THE HAWK OF THE CASTLE

A trained hawk serves as fierce centerpiece to broad, sweeping views of castle and countryside in this rhapsodic tribute to the craft of falconry.

The text unfurls in partly rhymed stanzas that all end, “House That Jack Built”–style, with the word “castle” and so take on an incantatory tone. In it, a white child follows her falconer father as he prepares and carries a hawk—“a sight to behold, / a master of flight, graceful and bold”—out for a day’s hunting. In inset corner boxes Smith fills in details about how trained birds of prey are traditionally fed and housed, how they hunt, and the purposes of bells and other specialized gear. She then closes with a note on falconry through the ages to today and lists of informational sources in print and online. With his customary skill Ibatoulline depicts hawk (probably a goshawk) and prey with every feather distinct, light-skinned figures clad in exactly detailed late-medieval dress and armor, an idealized European castle, and aerial views of thatched roofs and gently rolling countryside. Although the hawk is depicted about to snatch up a grouse and is later shown crouched over it on the ground, the rending and tearing bits are left out of view.

An idyllic picture of an ancient practice.