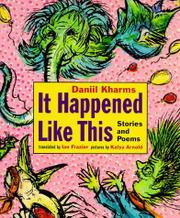 Ten absurdist poems and very short stories, written by Kharms (1905_1942) in Russia. At their best, as in "A Mysterious Case," of a portrait taken down for dusting that suddenly becomes a picture of someone else when rehung (upside down), or "Let's Write a Story," in which Sonya keeps commandeering her writing partner Boris's opening lines, the humor will play to young readers, but most of the stories are either fragmentary and surrealistic ("The Four Legged Crow"), or pointedly symbolic, or both. Arnold pays homage to the post-Revolution era's cultural ferment, as well as its severe lack of art supplies, with spiky figures rendered in thick, scratchy black lines and thin but vigorously applied color on wallpaper, wrapping paper, and even a montage of Soviet police documents. This evocative tribute to a writer unfamiliar to most US children will find its readiest audience in adults interested in children's books. (Picture book. 8+)