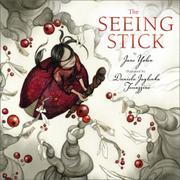 A wispy, sentimental story about a blind princess in Peking and a tattered old man who, employing the "seeing stick" on which he carves the elements of his stories and her environment, teaches her to see with the "eyes" on her fingertips. But however dormant her inner eye, which is presumably what's awakened here, it's surprising that, despite the efforts of contenders for "hundreds of miles around," . . . "it was the first time the princess had touched another person's face since she was a very small girl"—and even more surprising that she had to be taught to "see" with her fingers. Charlip and Maralis' shimmering pencil drawings consist chiefly of an odd, upright asparagus shape which represents both kingdom and stick and is usually featured in combination with hands, the other dominant motif. The pictures are spare and diaphanous, like the text, but so singular in their imagery as to freight the story with suggestion—without offsetting its fragility.