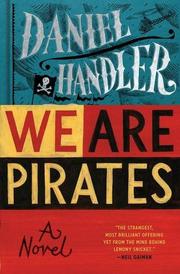 Life is a confused and confusing mess—but it still offers plenty of room for mischief, as Handler, aka Lemony Snicket, informs us.

When you’re a kid, you don’t know which side is up half the time. Then you grow up, and you really don’t know. So it is with Gwen Needle, who’s taken on the nom de crime Octavia (a good one, Octavia having been an exceedingly bad noblewoman of ancient Rome). It’s not that Gwen/Octavia is evil; she’s just antsy: “Twelve and thirteen she was pretty happy….Then one day boredom just set upon her with a fierceness.” She’s also penniless, since Dad, an always-pitching radio producer, is always this far away from landing a deal. Popped for shoplifting, she’s sent off to a veterans’ home to do community service. There, she meets an old coot who’s suffering from Alzheimer’s—not yet full-blown, Gwen’s warned, though the patient is given to flights of fancy and strange thefts of his own. He asks her if she’s there for a school project, and when she answers that it’s punishment, he growls, “Good, I’m glad. I don’t like the school project kids. You know you’re going to die when they come at you with a tape recorder.” Meanwhile, Dad keeps hoping the heavens will part and he’ll finally get to do something interesting with his life, like be an outlaw—a dream his daughter, it seems, is living, along with a band of merry mates, the old coot among them. Handler is a master at depicting the existential chaos all his major characters are living through, and with warmth, sympathy and considerable humor at that. The reader will delight in Gwen and old Errol's escapades, which involve plenty of jawboning but some good old-fashioned larcenous action, too, all of which affords her the street cred to say piratical things like, “You take one more step away and I’ll split your gullet” and "Totally verily."

Affecting, lively and expertly told. Just the sort of thing to make grown-ups and teenagers alike want to unfurl the black flag.