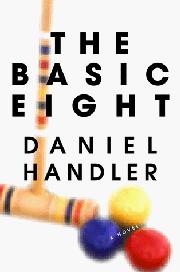 An adult young-adult first novel set in a San Francisco high school. Based on an actual California murder and already optioned by the producer of As Good As It Gets, the story centers on a high school clique, The Basic Eight. Narrating is Flannery Culp (—culp” as in blameworthy, “Flannery” as in O’Connor), a gifted senior and editor of the school paper, now flunking calculus, who is transcribing her Journal of a Woman Wronged in order to explain how it is that she’s been accused of leading a Satanic cult into murdering a teacher, as well as a fellow student, during a madcap drugfest fueled by absinthe, gin, and rum. Also on hand is Dr. Eleanor Tert, a therapist putting her own obtuse interpretation on the events told by Flan, although Tert is so parodistic that she (and pop psychologist Peter Pusher) may he a figment of Flan’s imagination. Flan looks up to Natasha Hyatt as the most self-assured creature in Roewer High School, a girl who does everything with a panache worthy of Cyrano. The other clique members are female except for budding chef Gabriel, a black who falls for Flan. Flan has just returned from a trip to Italy during which she wrote mash letters to Adam State, though, on her return, it seems that Adam will have little to do with her, especially since she’s going out with Douglas, who turns out to be gay. When Adam does make a play for Flan, who sees herself as a dumpy virgin, and then drops her, her jealousy leads to Adam’s slaying during a weekend drinking party. Did Flan kill Adam? You’re not quite sure, up almost until the second murder, whether this is an exercise in schoolgirl ironies or a serious novel. Will high-schoolers love the confusion? Will their parents find themselves befogged by the parodies? Is the author serious? Discuss.