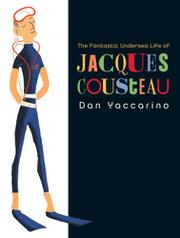 This second early biography of Cousteau in a year echoes Jennifer Berne’s Manfish: A Story of Jacques Cousteau (2008), illustrated by Eric Puybaret, in offering visuals that are more fanciful than informational, but also complements it with a focus less on the early life of the explorer and eco-activist than on his later inventions and achievements. In full-bleed scenes that are often segmented and kaleidoscopic, Yaccarino sets his hook-nosed subject amid shoals of Impressionistic fish and other marine images, rendered in multiple layers of thinly applied, imaginatively colored paint. His customarily sharp, geometric lines take on the wavy translucence of undersea shapes with a little bit of help from the airbrush. Along with tracing Cousteau’s undersea career from his first, life-changing, pair of goggles and the later aqualung to his minisub Sea Flea, the author pays tribute to his revolutionary film and TV work, and his later efforts to call attention to the effects of pollution. Cousteau’s enduring fascination with the sea comes through clearly, and can’t help sparking similar feelings in readers. (chronology, source list) (Picture book/biography. 6-8)