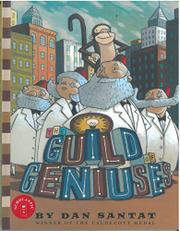 The story doesn’t quite float, but the sight of a very sad little monkey against backgrounds littered with retro, tin-can robots, wild-haired scientists in lab coats, and puckish sight gags will draw curious readers along. Seeing the solid gold car and similar gifts waiting in the lobby, little Mr. Pip the monkey doesn’t get around to giving his movie-star friend Frederick a simple birthday drawing. After fussing over his now-gloomy buddy to no avail, the mystified Frederick hires the Guild of Geniuses to cheer him up—but not even their efforts, which include importing a barrel of other monkeys, and even sending Pip to the Moon, can do the deed. Finally, it’s just a chance to hand Frederick the drawing (plus a Moon rock), have it properly appreciated, and then have a private party that turns Pip around. For more obtuse readers, Santat makes the Lesson explicit: “Spending time together was the most fun either had had for weeks. In fact, it was all Mr. Pip had needed in the first place.” Pip comes across as more moody than neglected, but children will chuckle over the urbane visual humor in this promising debut. (Picture book. 6-8)