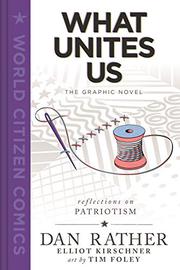 by Dan Rather & Elliot Kirschner ; illustrated by Tim Foley

A graphic-history treatment of the newsman’s collection of essays on patriotism.

As the longtime anchor of the CBS Evening News and host of 48 Hours, Rather spent decades reporting the news as well as intoning pronouncements on the state of the nation, a role that his cartoon self fulfills here. In the full-page panel that ends the book—featuring the author walking through a billowing American flag—he proclaims, “I believe in a wide and expansive vision of our national destiny. And I believe in all of you to help make it a reality. Courage.” It’s difficult to figure out what to make of this graphic treatment, since it doesn’t appear to be targeting a younger readership than the original volume of text, and the illustrations aren’t as dynamic as one might expect from the publisher of Eddie Campbell, Jessica Abel, Gene Luen Yang, Joann Sfar, and others. Instead of the sweep of history carrying the narrator along, Rather is often just standing there, talking and observing. The most effectively illustrated passages are more personal, with young “Danny” coming of age in hardscrabble Texas in a family that imparted strong moral values. Yet his education has been a lifelong process, and he has grown to acknowledge the blinders of those times: how the history he learned was so heavily focused on White male achievements and how diversities of race, ethnicity, and sexual orientation were marginalized, even invisible. The author celebrates patriotism in the embrace of such diversity, and he remains relentlessly hopeful about the country he loves as a “land of wonder, awe, and optimism.” However, he is also candid about our myriad divisions on education, environmentalism, social issues, and more. The six chapters have a scattershot quality, skipping around instead of developing the arguments that he built in the original essays.

A surprisingly bland treatment from a passionate writer and American citizen.