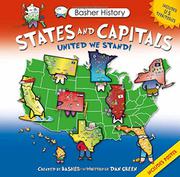 From the Basher History series

by Dan Green ; illustrated by Basher

Sprouting bodies and grins, the states introduce themselves alphabetically in this Basher History gallery.

Following the series’ cast-in-stone design, each entry poses in a cartoon portrait with small emblems representing prominent physical features, industry, number of native U.S. presidents and other select distinctions. On opposite pages, a hearty self-description dominates: “Aloha! Come and hang ten with me, dude. I’m a bunch of chilled-out islands in the Pacific, but I have a fiery heart.” This is sandwiched between bulleted lists of superficial facts, from state bird, flower and nickname to (for Arkansas) “Known for diverse landscape, extreme weather, and Walmart.” U.S. territories bring up the rear, followed by a table of official state mottos and, glued to the rear cover, a foldout map. Along with out-and-out errors (a mistranslation of “e pluribus unum”) and unqualified claims (Boston built the first subway), Green offers confusing or opaque views on the origins of “Hawkeye,” “Sooners,” some state names and which of two “Mississippi Deltas” was the birthplace of the blues. Furthermore, a reference to “sacred hunting grounds” in West Virginia and Kentucky’s claim that “It wasn’t until pioneer Daniel Boone breached the Cumberland Gap…that my verdant pastures were colonized” are, at best, ingenuous.

Chatty, formulaic, superficial—and dispensable, as the content is neither reliable nor systematic. .