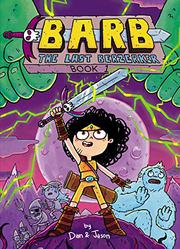 From the Barb the Last Berzerker series, volume 1

She-Ra meets How To Train Your Dragon in this vivacious series starter.

In the world of Bailiwick, bands of Berzerkers protect the people and land from roaming monsters. Barb is a small, light-skinned Berzerker with a mess of curly black hair, a fierce, can-do attitude, and an aesthetic that lightly nods to Wonder Woman. When her band of Zerks is tricked and captured by an evil demon named Witch Head, only Barb is able to escape, stealing the Shadow Blade, Witch Head’s magical sword, in the process. Teaming up with Porkchop, a friendly blue yeti, it’s up to Barb to harness the power of the Shadow Blade and journey to recruit the Northern Zerks to help defeat Witch Head. The art is bright, energetic, and stylistically akin to that of Jeffrey Brown. Thick lines, varied paneling, and a consistently large font further the book’s wide appeal. Human background characters have a diverse range of skin colors. Readers will delight in the occasional gross-out jokes, strange creatures (vampire goat fiends, mergoblins, the Grub of Death), heartwarming camaraderie, and the over-the-top villain. Amidst the silly chaos are quieter moments that touch on Barb’s familial trauma, the cost of the war between Berzerkers and monsters, and what it means to be a good friend. Earnest, unstoppable Barb is easy to root for, and the next volume will be eagerly anticipated.

Nothing will stop readers from devouring this book.