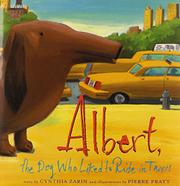 ALBERT, THE DOG WHO LIKED TO RIDE IN TAXIS

In this urbane New York City tale, a small dog’s horizons expand when an impulsive hop into a taxi opens up a world of tempting new prospects. Leaving his comfortable Riverside Drive routine behind, Albert finds himself transported all over town, greeting doggy friends as he passes from cab to cab, receiving offers from various riders headed for destinations as far apart as California and the Kalahari. Zarin tells the tale in an offhand, tongue-in-cheek tone—“Bark, woof, aargh!” goes the dialogue during a canine melee—that nicely complements Pratt’s views of city streets, long, low-slung yellow cabs and a likewise low-slung dachshund on the move. Albert ends up at the airport, where he runs into one of his startled owners returning from a trip—but the sight of jet liners taking off for parts unknown stays with him on the ride back home. Albert may ride the same streets as the Barraccas’ Taxi Dog, but by the close it’s plain that his traveling’s only just begun. (Picture book. 7-9)