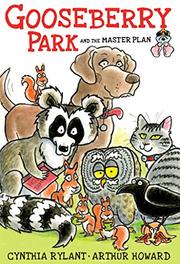 GOOSEBERRY PARK AND THE MASTER PLAN

Twenty years after the publication of Gooseberry Park (1995), Rylant returns with a sequel.

In the previous outing, the residents of Gooseberry Park coped with an ice storm; now, a drought threatens Stumpy the squirrel and her family, along with all the other animals. This spurs house pets chocolate Lab Kona and hermit crab Gwendolyn to devise the titular master plan to help their friends through the ecological disaster. Herman the crow—so smart that the rest of the crows have given up the annual chess match because they got sick of losing to him—works out a flowchart that involves a cat, a possum, a raccoon, 200 owls, and 20 packs of chewing gum. Murray the bat’s motivational-speaker brother puts his well-developed jaw muscles to work on the gum; Kona’s chocolate-Lab sincerity wins the unprecedented cooperation of 200 owls. Rylant writes with her customary restrained humor, creating with apparently no effort a full cast of three-dimensional furred and feathered characters. The story comes with lessons ranging from the overuse of fossil fuels to the peculiar magic of friendship, all applied with a gentle hand and a spirit of generous trust in the abilities of her readers to understand them. Her frequent collaborator Howard supplies lumpily humorous grayscale illustrations that augment the character development and give readers’ eyes places to rest.