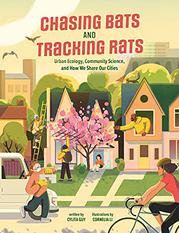 Urban Ecology, Community Science, and How We Share Our Cities

An ecologist offers glimpses of scientists at work exploring the “urban jungle.”

Guy kicks off her set of episodic profiles with a description of her own studies of brown bats in Toronto’s High Park. She then introduces fellow researchers tracking city-dwelling creatures, from rats and native bees to bears and coyotes, mapping microclimates in different city neighborhoods, or organizing censuses—in locales ranging from Vancouver to South Africa. Though it’s a swiftly moving survey, the discourse digs down deep enough to suggest that, counterintuitively, some species seem to do better in urban than natural environments, to call attention to potential ecological effects of redlining and gentrification, and to describe an encounter between a Black bird counter and a hostile White woman in North Carolina as prelude to a discussion of racial bias. Better yet, nearly all of the scientists here are women and at least three, including the author, people of color. For both specific portraits and certain scenes like a gallery of urban animal butts readers are challenged to identify, photographs would have done better service, but Li’s substantial mix of naturalistic animal silhouettes and silk-screen–style scenes of scientists engaged in outdoorsy tasks does add some visual detail as well as bright notes of color. The closing resource list is substantial, though light on material for younger audiences.

An uneven but wide-angled look at our closest neighbors…welcome and otherwise.