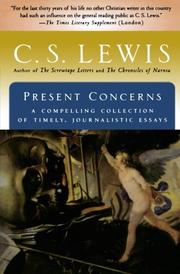 Impeccable, fanciful/polemical tidbits of Christian-oriented journalism—including one unpublished essay—from the author of The Screwtape Letters and The Narnia Chronicles. A cheerful introduction from editor Hooper (Oxford don and old friend of lewis) mentions Lewis' pronounced aversion to newspapers—he rarely wrote for them, read them next to never—and gives detailed publication sources for the 14 anomalous, previously uncollected essays that follow. Written between 1940 and 1962, most of these pieces employ a particular current event or concern (a government report on higher education; the publication of a book challenging logical positivism; the obscenity trial of Lady Chatterly's Lover) as a springboard for probing commentary on man's spiritual state. For example, in the longest essay, "On Living in an Atomic Age" (1948), Lewis uses increasing worry about the bomb as an occasion for illuminating man's place in the universe, quickly and surgically excising hedonism and existentialism as untenable philosophies and making a strong case for the moral necessity, at least, of faith in something beyond the visible. What saves all this from deadly gravity is Lewis' quietly aristocratic dry humor (an essay on "Sex in Literature" concludes, "Four-letter words may soon be as dated as antimacassars"); his astonishing command of the English language: and some startlingly unexpected views (e.g., arguing in Prudery and Philogy" that authors avoid using obscenities in order to preserve the originality of the "last folk art" left: the dirty joke). Although not Lewis at his very best, still representative of his polished profundity, and more provocative than most journalism collections.