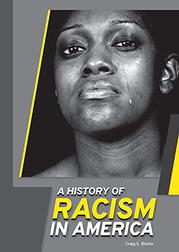 A HISTORY OF RACISM IN AMERICA

An extremely brief survey of racism in the U.S. from founding to the present day.

From the very beginnings of European colonialism in what would become the United States, there’s been both racism and people fighting it. Blohm is ambitious, beginning with a concise definition of race as a social construct and attempting to trace major developments in American racism beginning with the arrival of enslaved people from Africa in 1619. Because this work is so short, the end result is a speed run through the next 500 years. Luckily there are extensive source notes, because there’s not much room here for detail, as the author attempts to cover slavery, forced religious conversion of Indigenous people, Indian boarding schools, Japanese American internment, the Chinese Exclusion Act, Plessy v. Ferguson, and the Ku Klux Klan. From the Freedom Summer it leaps to the present day, with Stop AAPI Hate, Black Lives Matter, attacks on critical race theory, and the killings of Philando Castile and George Floyd. The recent rise in hate movements is also covered, with the assertion that we must maintain momentum in the fight against racism. The limited page count means an enormous amount is left out or touched on only briefly (redlining is entirely absent, for example). The layout and graphic design occasionally interfere with ready comprehension, but the accessibly written text will serve as a good general overview, particularly for reluctant readers.

Accurate, important, and blunt but much too brief; an introduction only.