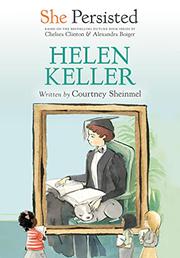 This entry in the She Persisted series provides a detailed look at the life of Helen Keller.

Helen Keller was born in rural Alabama in 1880. After suffering a severe illness as a toddler, she lost both her sight and hearing, leaving her isolated and unable to communicate with those around her. Her parents secured help for her when she reached the age of 7. Anne Sullivan was sent from the Perkins School for the Blind in Massachusetts to attempt to educate Helen. Sullivan would remain Keller’s companion for decades, accompanying her as she campaigned around the world for individuals who were disabled. This short work features Flint’s cheerful black-and-white cartoonlike illustrations; unfortunately, they don’t always match tonally with moments depicting Keller’s early struggles. The few brief paragraphs per spread explain the major details of Keller’s life, provide some insight into the difficulties she faced, and highlight the impact she had on the world. Although print is large and there is plenty of white space, some of the vocabulary seems fairly sophisticated for those just transitioning to chapter books. Although Sheinmel’s efforts are necessarily constrained by the nature of early chapter books, this one largely succeeds, partly due to the exceptionally inspirational topic. The series will include 12 other female subjects. With the exception of two children on the cover, all characters in this book are depicted as White.

An engaging portrait of a fascinating woman.