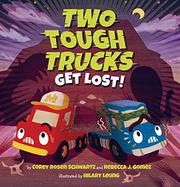 Nothing’s spookier than getting lost without your best friend by your side.

Once so different, the buddies of Two Tough Trucks (2019) are now as alike as peas in a pod. Mack and Rig spend their days, “racing and chasing and zipping ’round bends.” Warned by their folks to be back before dark, the two tear off into the saguaro-studded landscape, failing to notice with their headlight-eyes shut that when the road forks they take different paths. Upon discovering that they are not only lost, but separated, the two look high and low as the sun sets in the west. It’s Rig who thinks to light a flare and Mac who gets to the high ground, where he spots it. Reunited, they retrace their tracks, back to parents and home. This rhyming sequel, while peppy, downplays the trucks’ previously established personalities, rendering them nearly identical. It is nice to see them manage their mutual rescue, though the ending lands a bit flat. Blocky, cartoon art keeps things artful and peppy, rendering every little emotion a lost truck might feel in quick succession. Quick-eyed spotters will note the roadrunner and tortoise that secretly accompany our two heroes as they search for one another (even on the endpapers). (This book was reviewed digitally with 9.9-by-19-inch double-page spreads viewed at 18.5% of actual size.)

This sequel may not be wholly necessary, but little truck lovers will appreciate the light at the end of the tunnel.